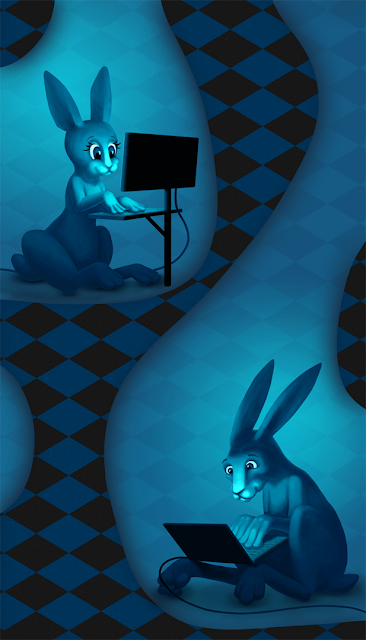 I finally finished this painting I've been working on sporadically for over a year. It's been a lesson in deciding to just suck it up and do the work I know needs to be done.


When I started out, I had an idea but I wasn't crazy about it. I wasn't even sure I'd finish it, so I wasn't committed to doing it well or right, I just put some stuff down. The inspirations were this web comic, this photo, and a new friendship that was forming much faster online than off.

First I tossed off some rough drawings and just scanned what I had, threw some color down, and went with the first composition that came to mind. Very boring and static.

After I found a better composition, I had to decide on a rendering style. The inspiration featured frosted glass chess pieces, suggesting a smooth Gaussian blur kind of look. That could have produced beautiful results, but it was also really tedious, and I still wasn't committed to finishing the piece. I tried it out on the boy bunny's face and then stalled out again.

The checkerboard background came in while I was swooning over the reference piece and reluctant to seriously dive into the character rendering.

Then I decided that a more painterly style with a semi-opaque hard-edged round brush was going to be faster and more fun for me, thereby increasingly the likelihood that I'd actually work on it. I grabbed some reference of how light from a computer screen in a dark room actually works. Shortly thereafter, I sucked it up and admitted that I needed to redraw the heads and hands entirely.


A few polish passes and some contrast adjustments later, and it's done!